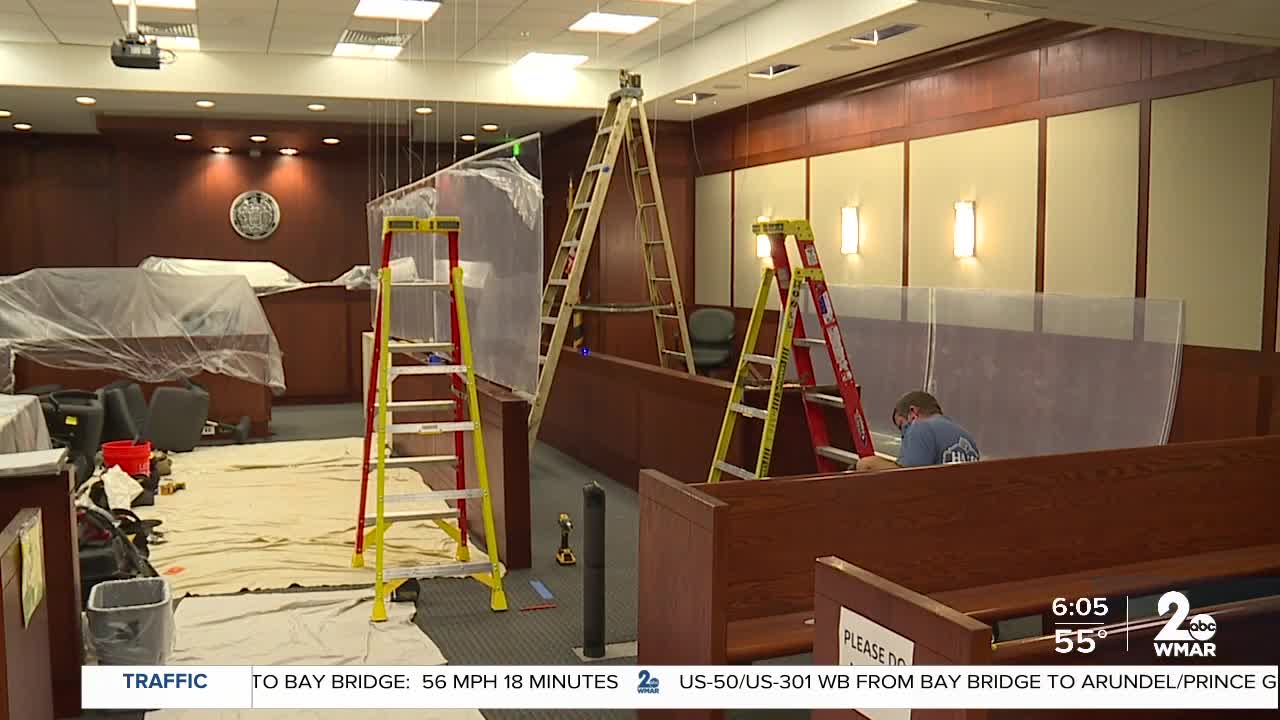 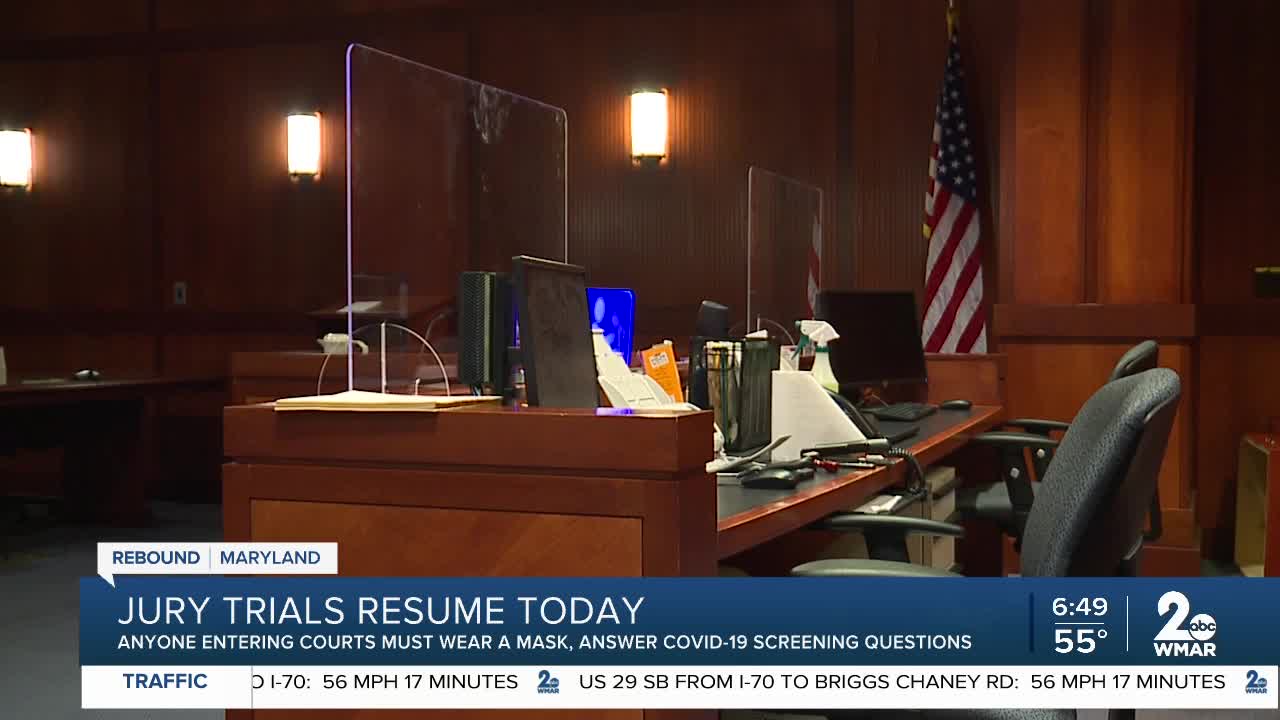 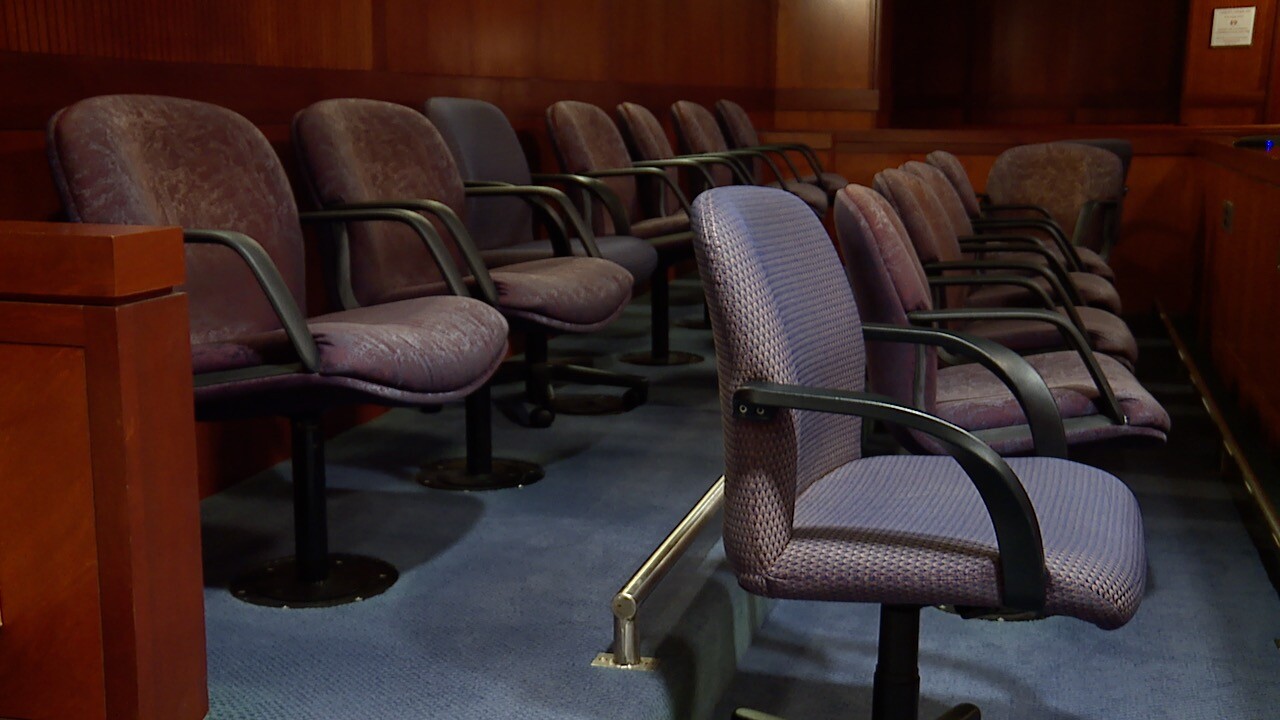 TOWSON, Md. — After more than six months on hold, jury trials are back up and running again in Maryland courtrooms October 5.

Courtrooms have been retrofitted for COVID-19 safety protocols to bring in jurors but there are hundreds of defendants still awaiting trial.

Courts have handled civil and family court cases which don't need a jury but there's still a backlog of criminal cases waiting to be heard.

With jury trials on hold for more than six months, Baltimore County Circuit Court Judge Judith Ensor recalls there were about 1600 felony and misdemeanor cases on the dockets.

About 700 have been settled out of court, but there's still a lot of catching up to do.

“We might have five to seven jury trials going in this building. We're retrofitting courtrooms and we're hoping to have four trials going on, and that's going to take a little time. Every day, we are a little further behind, but we are being creative,” Ensor said.

The plan is to split up the number of jury trials to hear between criminal cases and civil cases.

At least four courtrooms will be retrofitted with COVID-19 safety protocols in place such as three rows of jurors instead of two; plexiglass between rows of jurors spaced six feet apart; and reminders to stay socially distant for anyone sitting in on a trial.

“Some of the courtrooms can't be retrofitted. We have to have space for our jurors to be distant, and there simply isn't enough room to have six feet between everybody. So, we had to go through, literally measure every courtroom,” Ensor said.

How many jurors are needed for a trial depends on the type of case.

“In a civil case, each side gets four strikes, so we don't need as many jurors. In a criminal case, it can be 20 and 10 strikes. So, 30 strikes in order to pick a jury, 12 people plus some alternates, we have to qualify a lot more people,” Ensor said.

During a pandemic, a judge might need to call for even more than usual in case any show symptoms or contract COVID-19.

With so many changes in routine policies and procedures both in and out of a courtroom, cases brought before a judge and jury might take a little longer than usual.

“Because there are going to be hiccups along the way. I think when you anticipate that, you know, we've done what we can to anticipate what problems might come up and try to address those. They'll be others because our work involves people, and so I think we'll just be flexible and creative and patient,” Ensor said.

Despite the changes and COVID-19 protocols in place, some people might be apprehensive about getting called for jury duty during a pandemic.

“And I’m the person who thinks it is a gift and a privilege to serve. One of the great privileges of being an American citizen. So i agree, I have a different take on it. If there is a particular reason, the juror, the prospective juror is compromised, is living with an elderly person who is compromised, we're happy to receive that information,” Ensor said.