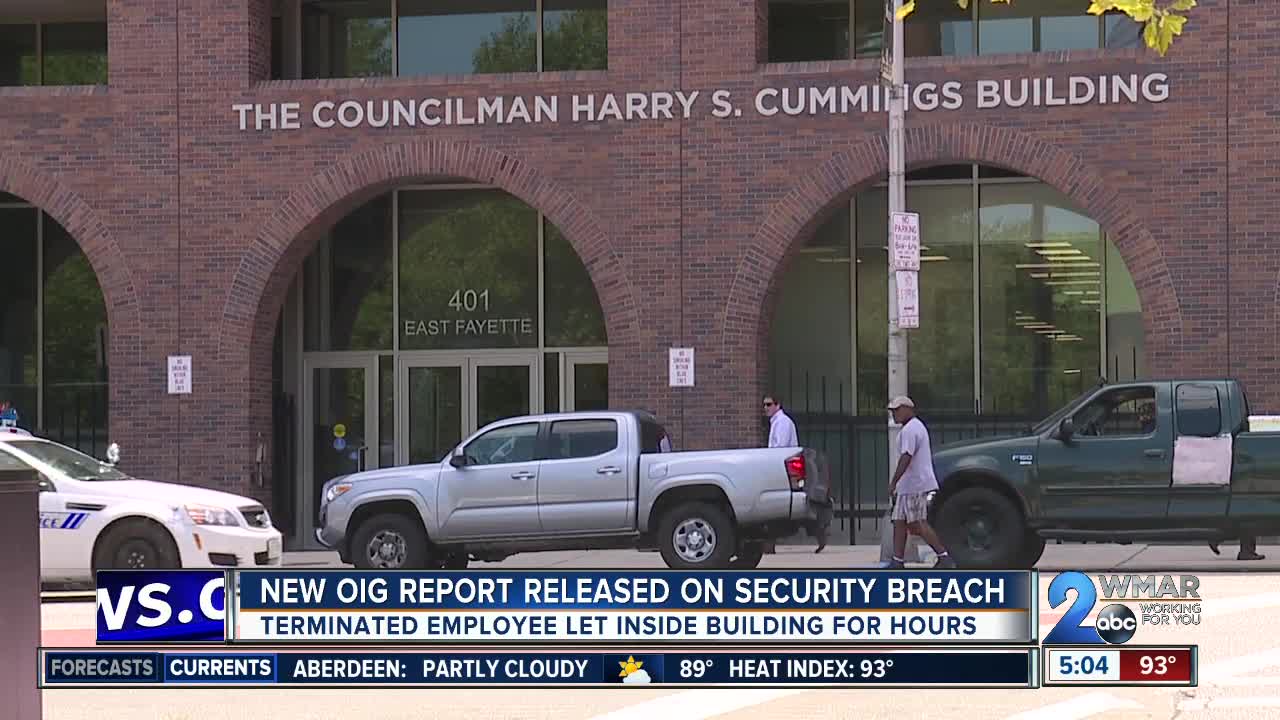 An investigation into the security breach in the Abel Wolman Municipal Building in Baltimore revealed that a former DPW employee made their way inside the building without proper security clearance.

BALTIMORE — An investigation into the security breach in the Abel Wolman Municipal Building in Baltimore revealed that a former DPW employee made their way inside the building without proper security clearance.

According to an investigation released by the Office of the Inspector General, on May 6, 2019 a front desk security guard allowed a former city employee to enter the Municipal building for over two hours without following protocol. The report says the former employee was able to access workstation areas and locations in the building that had sensitive material and equipment.

The OIG report clarifies that Municipal Building security guards stationed at the front desk are suppose to check each person's credentials, scan non-employee ID's into a tracking system, and to make sure that all visitors sign a log book. Investigators learned that the security guard at the time of the incident did not follow those procedures although the former employee notified him they were fired. The guard told OIG investigators that he allowed the former employee access because he knew the person.

OIG says the security guard has since been prohibited by his security company to work at any City-owned buildings.

During the former employee's visit in the Municipal Building, it was reported they walked in the building wearing a tactical vest and badge resembling a law enforcement officer. They then made their way through the offices and interacted with other employees. The reports says some employees noted they knew their former colleague was terminated and no actions were taken to contact the proper authorities. When OIG interviewed the former employee regarding the circumstances, they admitted to investigators they returned to the building to speak to some employees and along the way they accessed areas that housed sensitive equipment and information. OIG investigators learned the former employee told people he was wearing the vest as a part of his position as a process server, but it was later determined the uniform was bought online. The former employee also stated they knew the front desk guard was suppose to follow security protocol, but they didn't question his actions.

Officials within the building were notified of the entry of the fired employee after the person had already left the building.

OIG alerted the Department of General Services of their findings on the lack of communication, policies, and procedures regarding security access to non-city employees and terminated employees.

DSG responded to OIG saying they will review their current policy and procedures and implement changes. DSG says they also plan to implement immediate security changes to prevent similar incidents from happening again. Employee awareness on preventing unauthorized access to City buildings is also planned to be implemented. DSG reports the Department of Human Resources will work with them to address procedures for terminated employees.

VIEW THE FULL REPORT AND LIST OF DSG IMPLEMENTATIONS BELOW: