Opinion: Somebody at least try to stop Trump 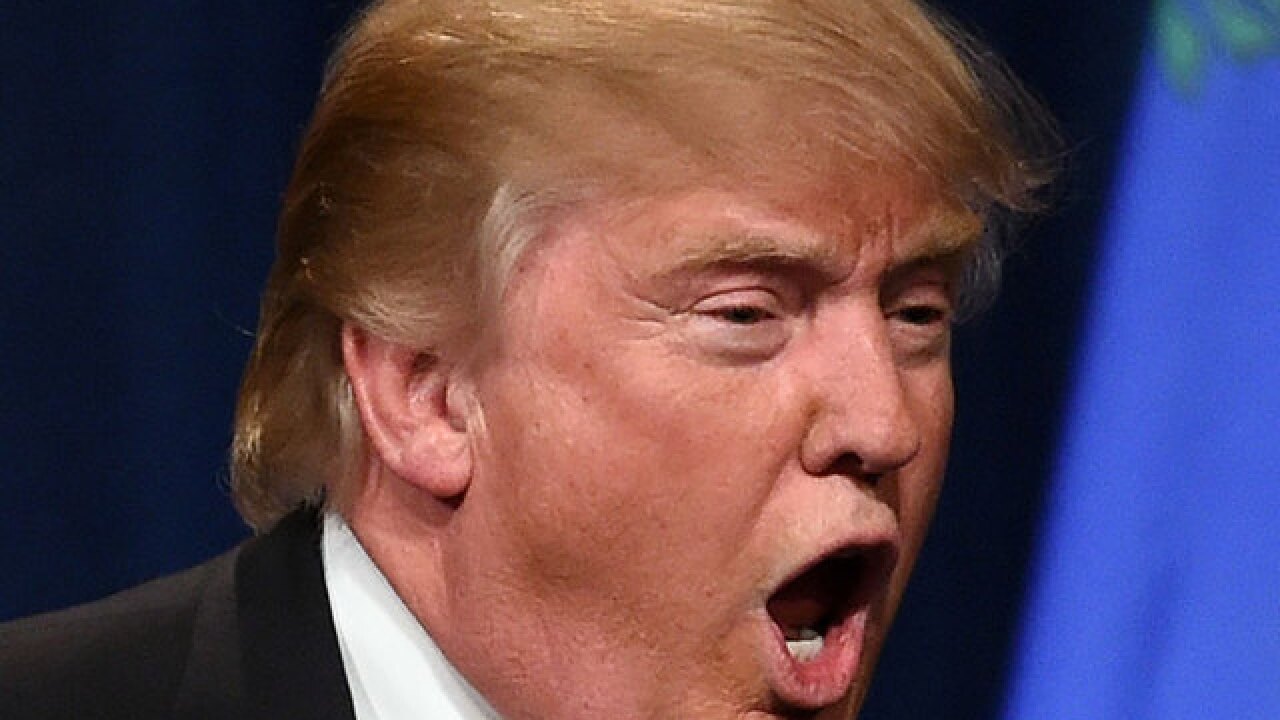 <p>Republican presidential candidate Donald Trump speaks at a caucus night watch party at the Treasure Island Hotel & Casino on Feb. 23, 2016, in Las Vegas, Nevada. The New York businessman won his third state victory in a row in the “first in the West” caucuses. (Photo by Ethan Miller/Getty Images)</p>

The political gangster who goes by the name “Donald Trump” has effectively terrorized the splintered and unruly community formerly known as the “Republican Party.”

Trump infiltrated the troubled party’s coronation process using an old trick of provocateurs; he played the harmless but amusing clown. Trump said he wanted to be their candidate for president, but most Republicans thought it was just a lark, a stunt, or some kind of post-modern marketing caper. The idea he could ever get the nomination was absurd. As flamboyant as he was, he posed no real risk so there was no need to take him seriously or attack him.

While the decadent, soft ruling elite’s guard was down, Trump launched a fiendishly clever guerilla campaign. His propaganda was pitch-perfect to agitate the GOP’s restless underclass – white voters on the lower rungs of the education and income ladder. He unabashedly demonized familiar scapegoats: Mexicans, Muslims, wily Asian countries, crooked American hedge fund guys and all the “losers” who run our idiotic government. He never talked like a standard American Important Person. Only losers and weaklings watch their words. Winners swear, brag, taunt, make stuff up, make threats and pick on weaklings.

Trump instantly became the most entertaining, “must-watch” political act in the history of mass media. He didn’t need TV ads, endorsements or any more knowledge about current events than average Joe.

After Trump dominated the polls for a few months, the diaspora of the Republican ruling elite was desperate for a counter-insurgency plan. They rejected all the traditional tactics. The other presidential candidates refused to attack Trump, the front-runner, with gusto and vicious negative ads.  They didn’t get secretive billionaires to fund Super PACs to kneecap the failed casino magnate.  They didn’t arrange high-profile events where influential figures denounced Trump en masse.

Finally, a united GOP response emerged. It was code-named Project Ostrich. The idea was that members of the party “establishment” should bury their heads in the sand until Trump disappeared or blew up.

Time’s up and Trump is the favorite, even inevitable according to some.

He is still anathema to a vast majority of Republican officeholders, party professionals, consultants, big donors, issue groups and the conservative media – from right-wing radio to the most prominent columnists. He is embarrassing and has no conservative principles.  Most think he will lead the party to disaster in November and far beyond. Some worry more about the reverse, that he will become president.

The time for paralytic incredulity – “this can’t be happening” – should be over.  It isn’t.

There is no Plan B.

Kevin Madden was a top hand in Mitt Romney’s 2012 campaign. After Trump’s win in South Carolina, I asked him if a coherent stop-Trump program was finally emerging (I was sure the answer would be “yes.”). “Hope is not a strategy,” he said.

One lonely Republican who does have a strategy, a little bit of funding and some moxie is Katie Packer. Another veteran of Romney’s campaigns, Packer launched the only anti-Trump Super PAC, Our Principles PAC, which maintains a Website called trumpquestions.com.

Her strategy is simple: “Try.”

“That’s right. No one has stopped him because no one has really tried,” she wrote in a memo posted on the group’s Website. “In my nearly 30 years of political involvement, I have never seen a campaign where the frontrunner had no aggressive, strategic campaign launched against him.”

There is a notion that Trump is a like a political antibiotic-resistant bacteria, a dangerous bug that can’t be killed by traditional medicine. Packer doesn’t buy it.

Her group spent a meager $1 million in Iowa on TV ads, radio and mailers that had a clear message: Trump is not a conservative at all. Packer argues the ads worked and lowered Trump’s vote count.

Packer is stunned the other candidates haven’t attacked this vulnerable, flamboyant, divisive character with full force. But she understands why some donors, politicians and civic leaders stay on the sidelines.  “It isn’t worth the headache,” she said.

For her good works, Packer has received several death threats from Trump fanatics. She has been around campaigns for 30 years and this is a first. She is under siege from Twitter trolls and other social media predators.

Earlier this week, it came out that the matriarch of the Ricketts family, which owns the Chicago Cubs, had made a large contribution to Packer’s group.  Trump instantly issued a thuggish threat on Twitter: “They better be careful, they have a lot to hide!”

The conventional Republican “hope = strategy” now is that the race narrows to Trump v. Rubio and Rubio wins because Trump’s support is limited to the third of the GOP voters who are in a pitchfork throwing lather.

Packer agrees that Trump would lose a two-man race. What she doesn’t see is a game plan to make that happen before it is too late and to attack him hard right now. That’s because there isn’t one.

“If all of us join forces in a concerted effort to expose his record and his rhetoric, it is possible to stop him,” Packer wrote in a memo. “If not, we will have the nominee we deserve.”

But surely the country doesn’t really deserve this guy.