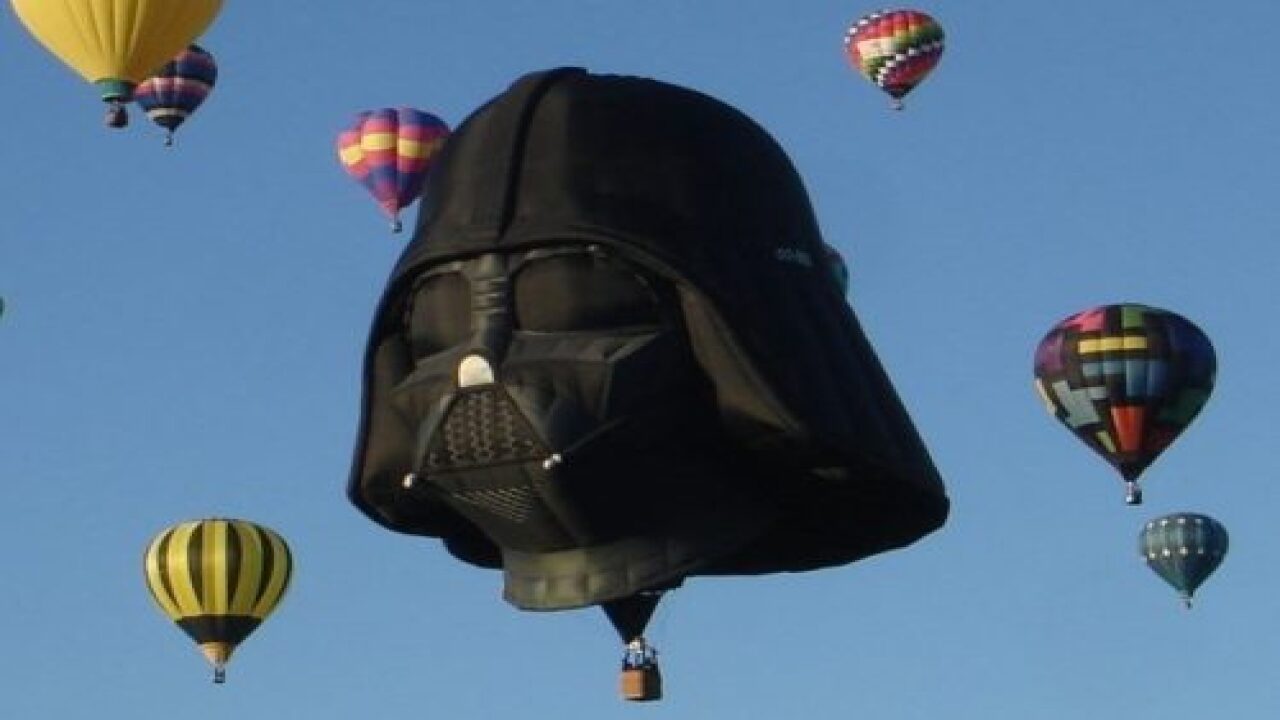 Last week, you could see the gigantic head of Darth Vader floating over Bristol, England.

That’s because there’s a hot-air balloon of the iconic “Star Wars” villain that exists — and in fact, has been flown in cities around the world. It was seen over the skies of the British city during the Bristol International Balloon Fiesta, which took place from Aug. 8-11.

This flight is especially significant locally, because the balloon was created in Bristol and had never flown there before. And Bristol is the hometown of the man who originally wore the Darth Vader suit in the first three “Star Wars” films, though his voice was later dubbed over by James Earl Jones. Retired character actor David Prowse, a 6-foot, 6-inch bodybuilder, holds that honor.

The balloon’s appearance in Bristol was made possible by an online crowdfunding campaign spearheaded by the nonprofit Bristol International Balloon Fiesta , which to date has earned about $6,370 of its $12,094 (that’s 10,000 pounds) goal.

“The Darth Vader special shape hot air balloon was built in Bristol by Cameron Balloons but has never flown in this fine city (we know!),” the campaign page says. “The incredible feat of engineering has toured the world and been photographed over Australia, United States, China and Malaysia (to name just a few) but has never flown in the skies over Brunel’s Suspension Bridge, the coloured houses of Totterdown and the city that Vader himself, David Prowse, called home.”

The crowdfunding page adds that the money raised, although not quite meeting the goal, was enough to bring the balloon back for the 2019 event.  It was one of 130 or so hot air balloons that could be seen in the skies during the 40-year-old Fiesta, and indeed provided some iconic Bristol views for the expected 500,000 attendees, as organizers wished.

They posted on Facebook, “We loved our naked nightglow and Darth Vader flying over the suspension bridge…a truly Bristol moment!!”

People who saw the balloon were quite impressed … and perhaps intimidated. Not by the Dark Side, but by the balloon’s sheer size. Plenty of cameras recorded the awesome sight.

Twitter user Mike Hamer notes that the ascent requires a bit of heavy breathing to make the scene complete:

Caught a glimpse of #DarthVader in this morning’s mass ascent in #Bristol . With appropriate breathing sound effects! pic.twitter.com/UWSjnbsTPr

Twitter user Sandyslifethroughalens calls the Bristol balloon fest a “fab family day,” but we think this view of Darth Vader peeking at the crowd over trees could freak kids out a bit.

Getting up early for the yearly visit to the Bristol Balloon Fiesta was definitely worth it this morning, a fab family day! @bristolballoon #DarthVader #bristolballoonfiesta #bristol #hotairballoons #bristolballoons #familyday pic.twitter.com/NSJeaMSqVk

As you can imagine, there were plenty of references to the Force in social media posts about the Darth Vader balloon. But the best comment may be the one made by Mark Hamill, the movie franchise’s Luke Skywalker.

The actor posted a video of the balloon’s rise, saying, “After a horrible, no good, terrible week, there’s nothing quite like a giant floating #DarthVader balloon to distract from reality & raise your spirits. #ThanksDad.” We think he wins this one again.

After a horrible, no good, terrible week, there's nothing quite like a giant floating #DarthVader balloon to distract from reality & raise your spirits. #ThanksDad https://t.co/Js4J0Pb2WK

What a space-worthy sight! If it’s true that there are places in the galaxy strong with the Force , we think Bristol must be one of them.

This story originally appeared on Simplemost . Checkout Simplemost for other great tips and ideas to make the most out of life.