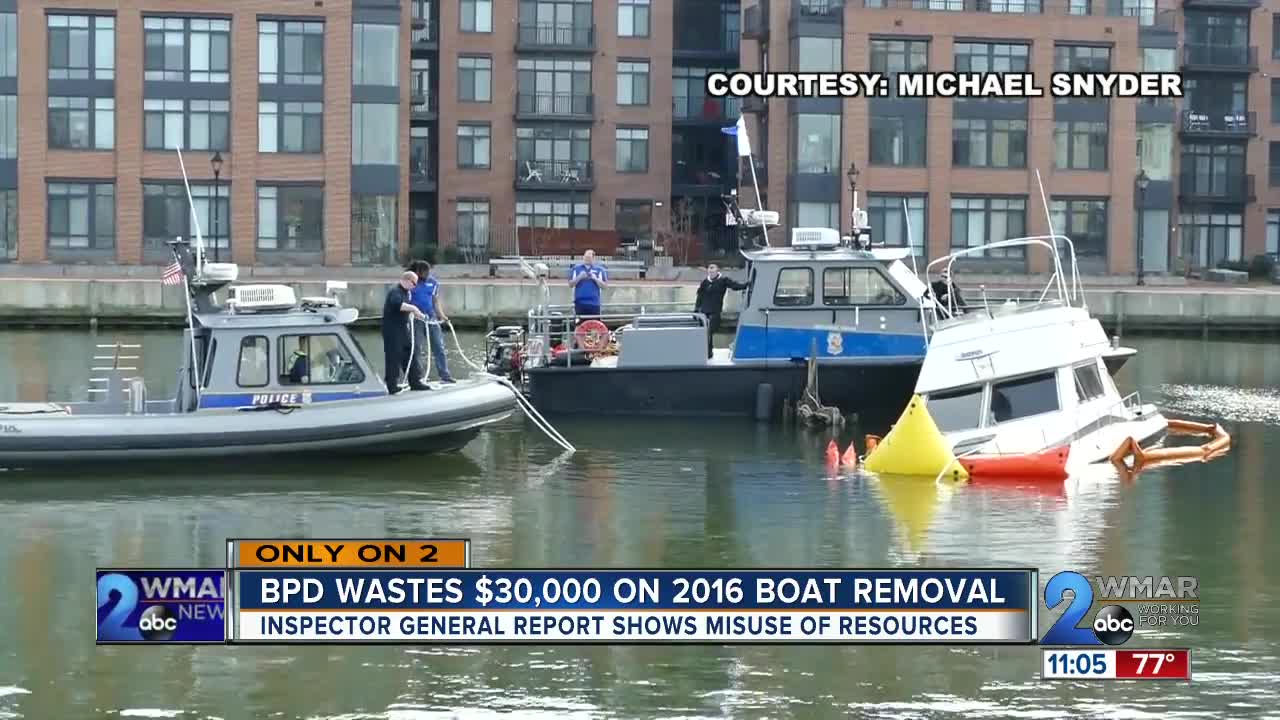 An investigation conducted by the Office of the Inspector General for the City of Baltimore revealed the Baltimore Police Department Marine Unit's supervisor misused more than $30,000 of city funds to improperly remove an abandoned boat from the Inner Harbor. 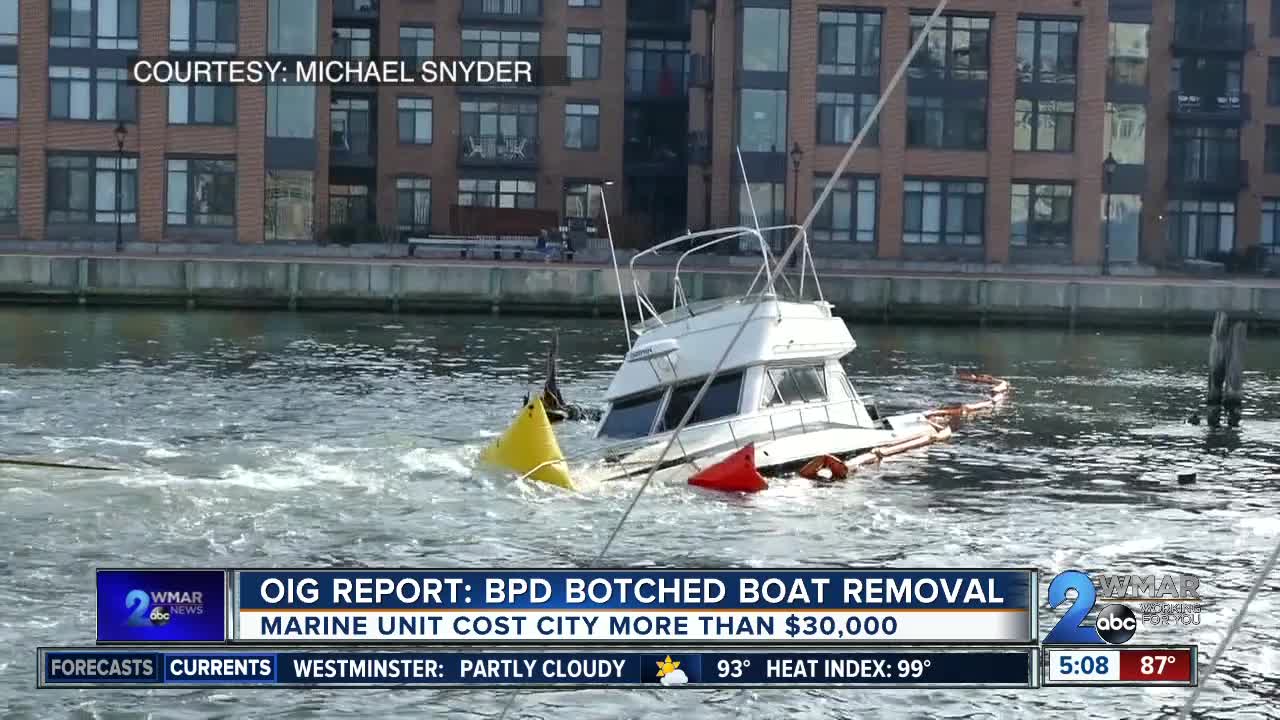 BALTIMORE — An investigation conducted by the Office of the Inspector General for the City of Baltimore revealed the Baltimore Police Department Marine Unit's supervisor misused more than $30,000 of city funds to improperly remove an abandoned boat from the Inner Harbor.

According to the report released by the Office of the Inspector General, in December of 2016, BPD's Marine Unit began efforts to remove a 32-foot boat worth $11,700 from the Inner Harbor near Thames Street. Instead of the unit using free removal resources through a program provided by the Maryland Department of Natural Resources, they decided to take another route that cost the city $30,142.25 and left the boat completely destroyed.

Although Marine Unit personnel told investigators they knew about the free removal program and inquired about it, OIG officials say they did not find any evidence to back up the unit's claim. It was reported they provided conflicting accounts to the OIG about their knowledge or potential utilization of the DNR program. OIG officials also found inconsistencies within BPD personnel's claims that the boat's last registered owner was paying for the boat removal. BPD personnel even stated that there was no overtime paid to officers during the removal, but a review of BPD records showed otherwise. The OIG could not determine who granted the authority for the Marine Unit to remove the boat, and received conflicting accounts from BPD personnel about who gave them permission.

The boat had been immobilized and impaled on a piling in the water. The report states the Marine Unit devised a plan to hook up a tow line from a BPD boat to the salvage boat and tried to dislodge it. Then, they used a BPD truck to attach a tow line from the truck to the boat, but those efforts didn't work. The unit then reached out to the BPD Bomb Squad to request using a detonation cord in hopes of wrapping it around the piling. The Bomb Squad denied that request.

The investigation revealed that the Marine Unit proceeded to purchase a $900 underwater chainsaw that would remove the boat. The chainsaw was bought by a BPD officer with his personal credit card. He then sought reimbursement for the purchase from the department. OIG officials learned the officer emailed his commander saying the chainsaw was being borrowed from the vendor when in actuality it was determined through the investigation that it was actually purchased.

When the boat was finally removed from the area the unit used $7,367 of department funds to pay a private tow company to use their crane, tow truck, and tractor-trailer to get the boat out of the water.

It wasn't until a concerned city resident reported videos and pictures of the Marine unit's three month long boat removal operation to the OIG that an investigation ensued. The agency reviewed and consulted with professionals who told them Marine Unit personnel were using dangerous and unsafe measures to execute their plan.

WMAR-2 News spoke to Michael Snyder who noticed what was happening and recorded it.

"They spent days and a couple of weeks trying to recover this boat. It was obvious watching them they didn’t know what they were doing,” said Snyder.

The Inspector General of Baltimore City, Isabel Mercedes Cummings says they couldn't believe that officers were ignoring their responsibilities.

Baltimore Police Commissioner Michael Harrison was notified of the investigation and responded to OIG officials saying they forwarded the incident to the Public Integrity Bureau for disciplinary action.

Commissioner Harrison says the BPD leadership team implemented the following changes to prevent this type of misconduct from happening again:

• All personnel assigned to the Marine Unit will have the necessary skills and training to properly fulfill the Unit’s responsibilities.