Eight-year-old Savannah has made it big in the deaf culture, and in pop culture, after a video of her singing went viral on Twitter and Facebook.

FREDERICK, Md. — Eight-year-old Savannah has made it big in the deaf culture, and in pop culture, after a video of her singing went viral on Twitter and Facebook.

Savannah was born with moderate to severe hearing loss. And as a member of a Frederick family who are all deaf, she has turned her love for music into something greater than ever before.

The oldest of three was born with some hearing and uses ASL to communicate. Savannah didn't let that stop her from singing her heart out and learned to sign to Carrie Underwood and Ludacris' song 'The Champion.'

Using her hearing aids she was able to catch the beat in the hearing world and graciously sign without television captioning.

With the help of her father Richard Dahn, who asked on Twitter for the clip to be shared, Savannah has been able to reach the hearts of many through her viral video. 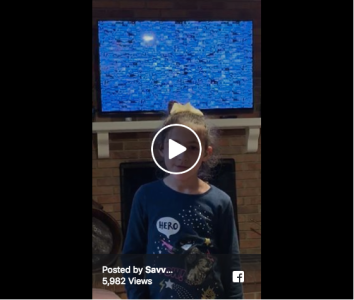 "I think this experience has been so impactful for Savannah and in turn for others is the song itself speaks about the courage to be a champion," said Savannah's father, Richard Dahn.

And Savannah is champion, a viral champion who has taken her talents and reached over one million views.