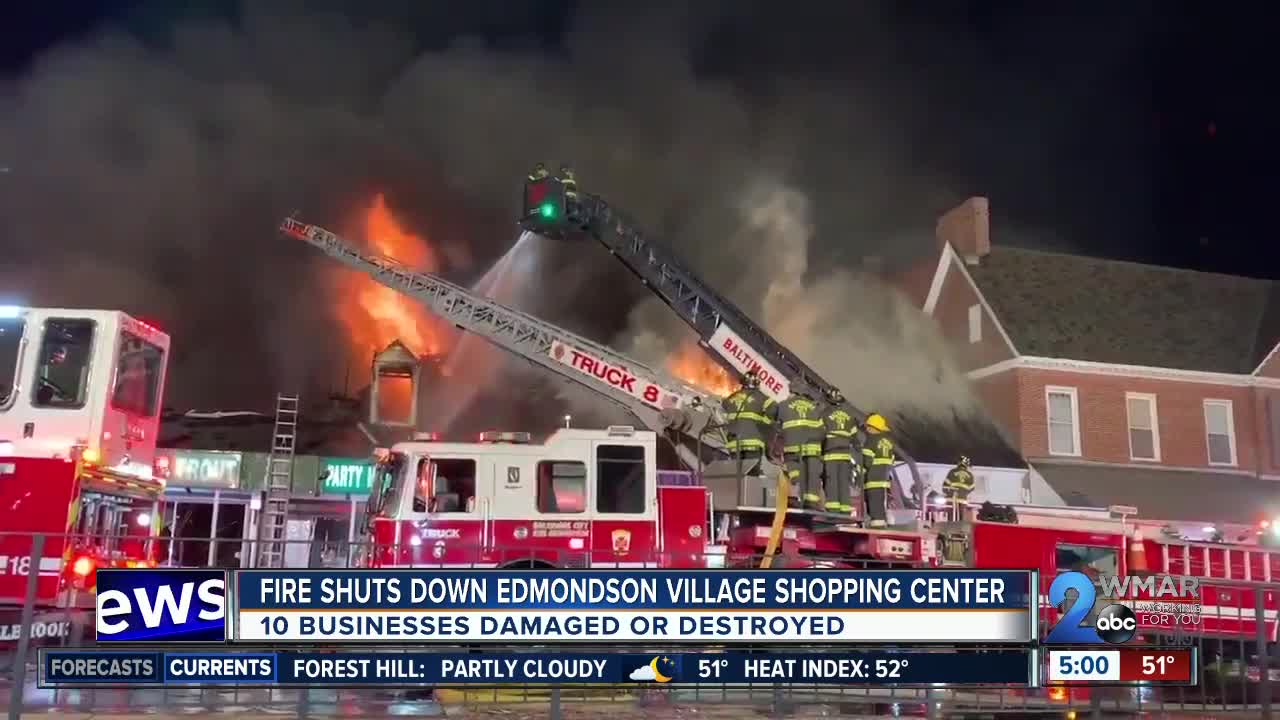 The Baltimore City Fire Department reported to the 4500 block of Edmondson Ave in West Baltimore around 12:30 a.m. to put out a 3-alarm fire. 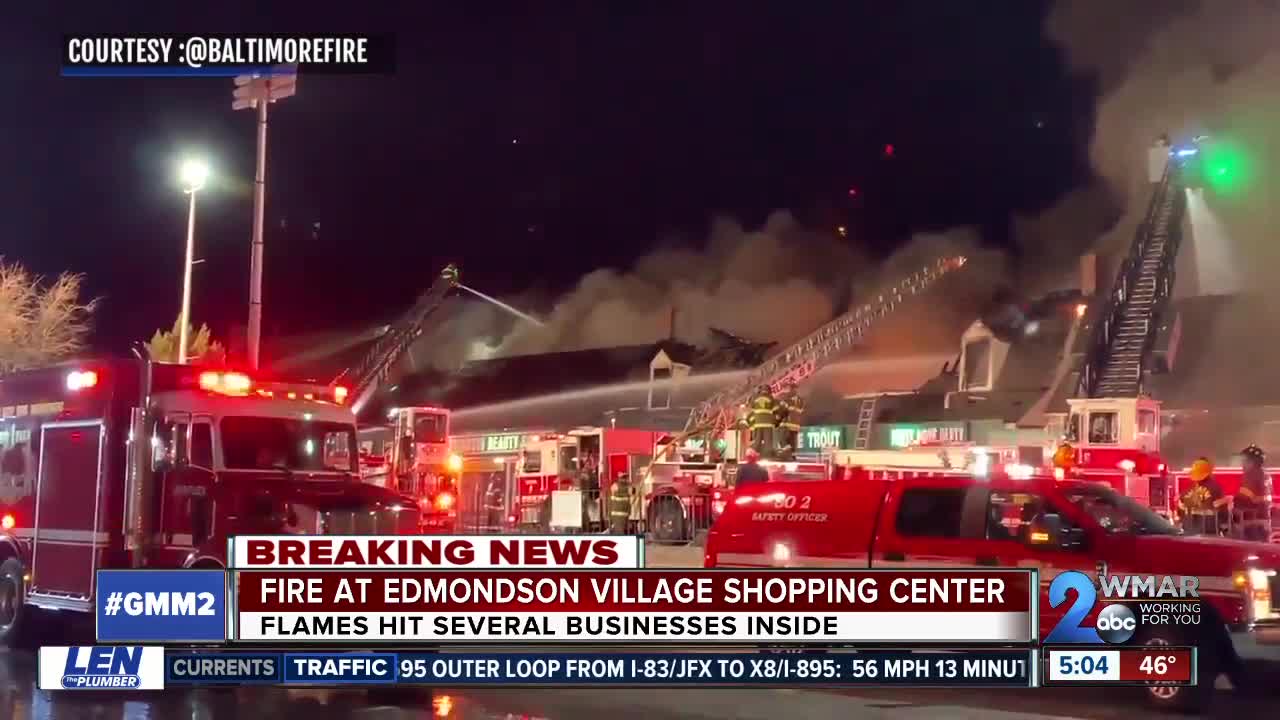 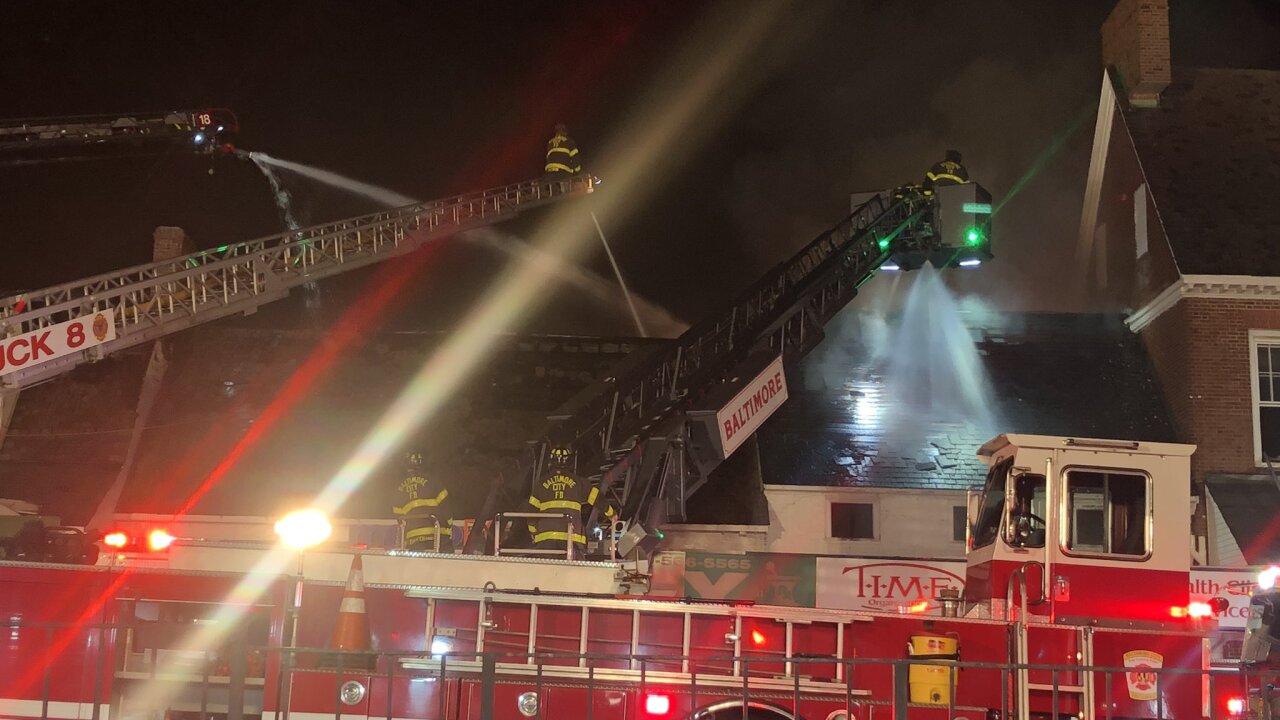 BALTIMORE — By the time firefighters could answer the call at the Edmondson Village Shopping Center, the fire had already started down its destructive path.

"Immediately upon entering one of the businesses, they were face with heavy fire and smoke that quickly spread to multiple businesses in the Edmondson Village Shopping Center,” said Blair Adams of the Baltimore City Fire Department, “The fire began to be so intense and the smoke was so strong and thick that they called out additional alarms."

Three alarms in all, as fire crews from neighboring Anne Arundel, Baltimore and Howard counties all joined in trying to contain the fire, which ultimately spread to 10 businesses in all.

Businesses with products ranging from groceries and medicine to hairstyling and fast food, which will be sorely missed in this community.

"I just had to come up here and see it for myself and just look at it," said Jason Born, a regular customer.

"Seeing pictures and everything like that, it really traumatized me,” added his mother, Keisha Brown, “So seeing it firsthand like this, I'm just really a nervous wreck."

At daybreak, some business owners and their families returned to find out what, if anything, remained.

"It's sad. Horrible,” said a man whose family owns a restaurant that was badly damaged, “It looks like outside like the same thing. Everybody is feeling the same thing."

The shopping center has been a mainstay in the community for more than 70 years, and fire officials say has overcome similar fires in the past.

"This isn't the first time that a fire happened in the Edmondson Village Shopping Center,” said Adams, “even dating back to as early as 2008 when we had a four-alarm fire here and then in the late Sixties where we had a six-alarm fire here."

There is a hope that merchants will be just as resilient in overcoming this fire as they have been in the past.

BGE turned off gas service to the building this morning, but we're told the large gas main, which feeds the center did not in any way contribute to the fire.

#BCFD is on scene of a 3Alarm fire in the 4500blk of Edmondson Ave. Multiple businesses in the Edmondson Village Shopping Center has fire showing through the roof. @ChiefNilesRFord pic.twitter.com/DWUKGKm725