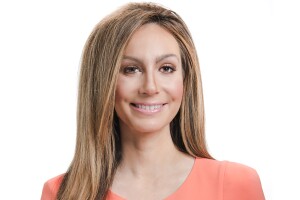 Recipient of the AMS seal, Meteorologist Sabrina Fein has dreamed of broadcasting the weather on TV since she was in elementary school, after experiencing Hurricane Andrew in Miami. During this time, Sabrina realized how important a TV meteorologist was to a community’s safety.

A University of Miami grad, Sabrina majored in meteorology and minored in physics and math, while still attending most Hurricane football games! She also has recently gone back to graduate school and has obtained a Certificate in Social Media from the University of Florida.

Sabrina’s career started in Tornado Alley, where she worked in Springfield, MO and Lubbock, TX. She moved to the Sunshine State for jobs in West Palm Beach, Fort Myers and Orlando before moving west to San Diego, as the Chief Meteorologist for CW6. It was here that Sabrina started her family, and eventually took a year off to stay home and raise her kids, while also relocating to Baltimore for her husband’s career.

Sabrina is excited to make Maryland her new home, and is looking forward to attending Preakness, going to Ravens games and eating Maryland’s famous Old Bay seasoning on her French fries! Sabrina lives in Towson with her husband, two daughters & two dogs.

Sabrina has been a team leader for events with the Cystic Fibrosis Foundation, after being introduced to the charity through her college sorority, Delta Phi Epsilon. She has also volunteered with Big Brothers Big Sisters, and the Make-A-Wish Foundation.