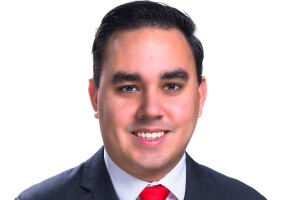 Eddie Kadhim joined the WMAR-2 News team in December of 2017 bringing you the latest news on WMAR-2 News at 11.

Eddie was born in Yonkers, New York and grew up in Albany. He's the youngest of three boys and says he learned to speak in a crowded room at a very early age.

Eddie's passion for storytelling and meeting new people is what drew him into news. His sophomore year of college he started out as a teleprompter operator in Albany. Eddie worked his way up to photographer and a couple of months after graduating college he got his first on air job as a reporter in Kirksville, Missouri.

Eddie says he learned a lot in that small town, which led him to his next job as a producer and reporter in Myrtle Beach, South Carolina.

Now Eddie is embracing Baltimore. He's living downtown and using his free time to walk around and explore the city. On his days off he likes trying new restaurants, but says he's never mad if the day is spent on the couch with home-cooked food.

Fun fact: Eddie says he's had Chicken Parm in over 100 restaurants. He also enjoys watching anything Sci-Fi or fantasy and is a big football and basketball fan.